Time and time again, we are reminded that few things are certain except death, taxes…and civil wars within labor movements.

This latest scuffle occurred within the ranks of the Gig Workers Collective (GWC). The relatively young organization is committed to targeting and organizing shoppers on grocery delivery platforms such as Shipt and Instacart. GWC members have often pointed shoppers to a competitor called Dumpling, which bills itself as an “ethical” competitor. But a new Vice article revealed that Dumpling might be a bit stale. What’s more, a one-time prominent GWC member and representative of workers is now siding with management in the fight.

According to Vice, Dumpling misled its shoppers, which it calls “business owners,” about how much autonomy and power they actually have on the platform. The truth became apparent after Dumpling changed its pay model in the second half of 2020. As the year went on, Dumpling increased prices and removed features.

The app announced new monthly plans that charged business owners credit card processing fees of up to 3.9 percent per order, and higher fees for monthly subscriptions to its services. But the greatest pushback came in November, when Dumpling removed a popular feature that allowed business owners to set their own tipping minimums.

As the changes increased, so did the company’s censorship of its Facebook group.  According to one shopper quoted in the article, “If someone didn’t like the new changes and spoke out in the Facebook group, their comments would be muted, not approved, or they would be kicked out of the group.” The situation came to a head when Dumpling deleted the Facebook group completely.

Further details about the situation were revealed by GWC leader Vanessa Bain after she posted a series of Dumpling-critical tweets revealing that GWC tried to moderate between the company’s leadership and several “business owners.”

The most interesting detail in the article is the change in tone of Matthew Telles. Telles, an early GWC member, appeared to be a de facto spokesperson for the group on several occasions dating back several years. Via the Chicago Tribune, Telles even earned himself the title of “chief agitator” against the delivery companies.

Today, Telles is whistling a different tune. He was an early supporter of Dumpling and told TechCrunch last summer that “Dumpling is now my career.” He’s sure acting like management: In the Vice article, Telles defended the company’s decision on a new tipping policy, and on social media he lashed out against his former GWC comrades: 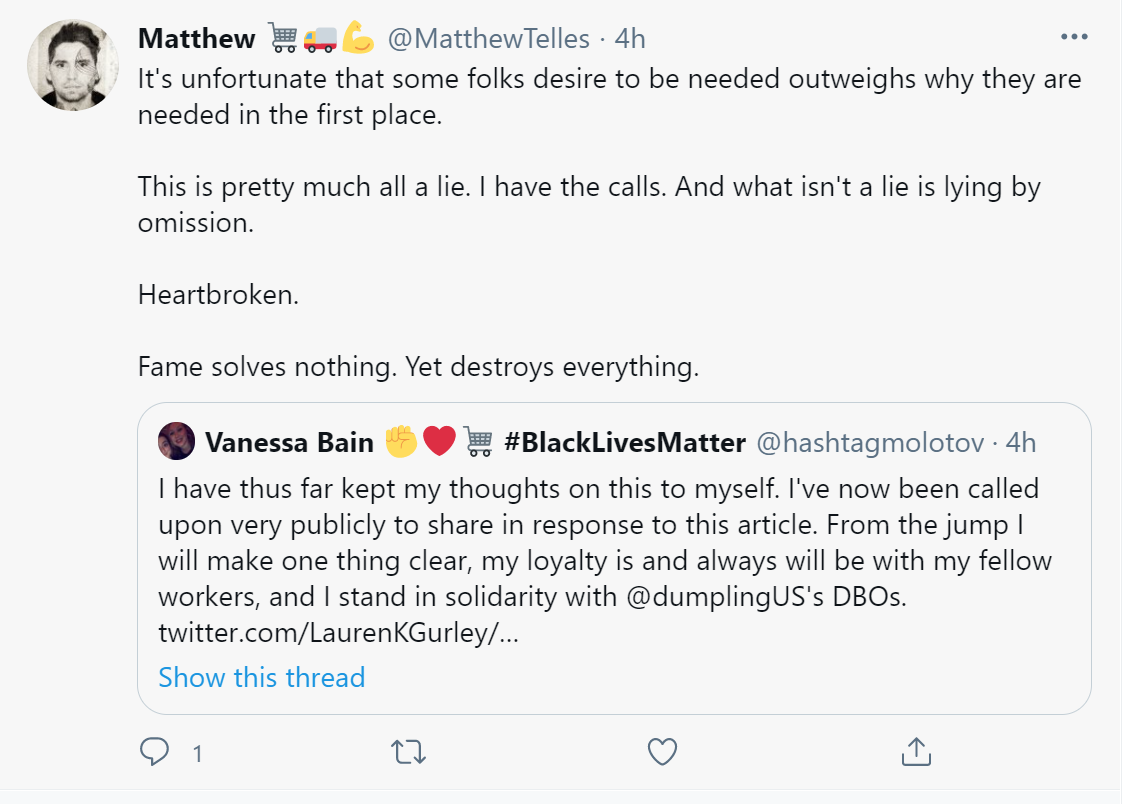 While the situation seems far from over, it appears that the Gig Workers Collective isn’t so collective after all.