Is a worker center a labor union?

Generally, a worker center IS NOT recognized or protected under the National Labor Relations Act. It is legally not a union, and does not follow the governance practices of a labor union. At the same time, most worker centers are funded by unions, and serve as union front groups.

If I go on strike with a worker center, can I be fired or replaced?

Yes, that is a risk. It depends on the situation. An employee who participates in a “strike” organized by a worker center may not be protected against replacement, discipline, or firing, for certain reasons. 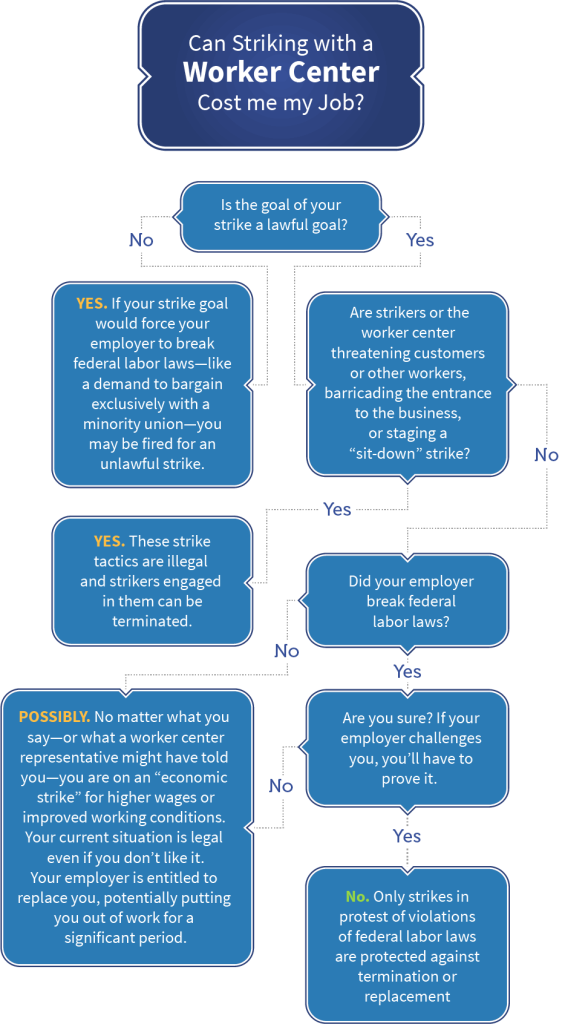 If you walk out, or “strike,” you may be legally terminated. Federal law specifies certain things for which it is illegal to strike. If your strike is found to be for those ends, you may be legally fired. Even it your strike is lawful, if it does not meet certain specific facts it is an “economic strike” and you may be permanently replaced without guarantee of re-hire. Merely stating that unfair labor practices have occurred does not mean they actually have occurred.

Must I pay dues or any fees to a worker center?

No. A worker center cannot make you pay dues unless a union wins exclusive bargaining rights under the National Labor Relations Act by a card signature drive or unionization election and becomes a labor union.

Do I have the right to vote on the worker center’s leadership or policies?

Typically, no. Since they are not labor unions, worker centers do not have to follow federal regulations on unions. They are not required to have democratic elections for union leadership or prove majority support of the workers the center claims to represent. If a worker center does allow such votes, they can be revoked at anytime.

My co-workers are going on strike with a worker center! Do I have to join them?

No. A worker center cannot punish employees who refuse to join a strike since it is not a labor union. Additionally, striking for certain purposes does not provide protection against an employer replacing you with a new employee.

What are my rights regarding joining a union?

The Center for Union Facts, which sponsors this website, provides a set of frequently asked questions about joining a union. It is illegal to pressure an employee to join or not to join a labor organization.