Worker centers and their conduits give the appearance of being part of a grassroots worker movement. In reality, their efforts are typically the result of a well-coordinated strategy with several key players. In some instances, this strategy includes attempts to target specific companies by promoting alternative services. 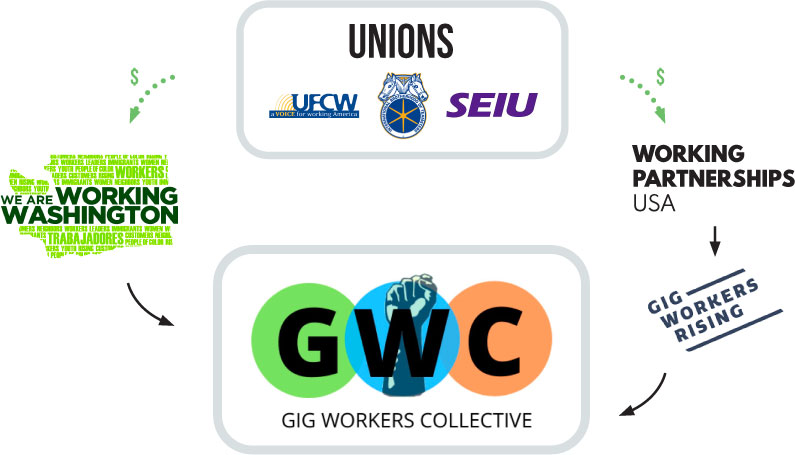 Existing gig-economy organizers have recently come together to form Gig Workers Collective, an organization with a pending 501(c)(3) status.

Some unions have become experts on setting up worker centers to promote their agenda. In Southern California, hospitality worker union Unite Here Local 11 has propped up multiple front groups to help organize workers.

Clergy and Laity United for Economic Justice (CLUE) is an appendage of Local 11’s organizing apparatus, acting as a union front group to promote the union’s interests. Since 2010, Local 11 has donated almost $1 million in member dues to CLUE, which frequently organizes rallies and disruptive protests to increase union membership.

Local 11, CLUE, and Los Angeles Alliance for a New Economy (LAANE)—a CLUE ally and another member of Local 11’s organizing arm—share the same Los Angeles address. LAANE has received over $800,000 from Local 11 since 2010.

Orange County Communities Organized for Responsible Development (OCCORD) is another partner of Local 11’s. Local 11 co-president Ada Briceño is even chair woman of OCCORD’s board. Local 11 has made a significant investment in OCCORD over the years: Department of Labor data tracks over $600,000 to the group over the past decade.