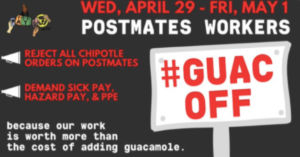 The Service Employees International Union (SEIU) is in the midst of a corporate campaign against Chipotle. Last year, New York City-based SEIU local 32BJ ramped up its Fight for $15 movement to organize workers at the burrito chain’s locations in the city. And that’s just the latest iteration of the union’s partnership with the Fight for $15. Over the years, the SEIU has poured millions of dollars into this national campaign to raise the minimum wage and organize fast-food restaurant employees.

The coronavirus may have stunted the union’s on-the-ground efforts for the time being, so it’s not surprising that the SEIU has turned to its trusted (and funded) worker center Working Washington (WW) for help. What is surprising: That WW would use its gig worker organizing efforts to launch a second front against Chipotle. This week, WW is calling for a three day long #GuacOff where Postmates delivery workers are asked to ignore any Chipotle orders that come in. The strike follows a partnership between Chipotle and Postmates that gives customers free delivery during the crisis. Through its Payup.wtf campaign platform, WW has advertised the strike as a way for workers to “demand sick leave, hazard pay, and safety protections” from Postmates. Considering WW’s close relationship with the SEIU, it seems this “GuacOff” has the added benefit of going after one of the SEIU’s top targets, if only indirectly. According to financial filings with the Department of Labor, the SEIU has given almost $20 million to WW over the last several years. Since 2017 alone, the worker center has received over $1.7 million from labor unions overall. As union membership continues to decline, labor leaders have increased efforts to organize the gig economy. WW and other gig economy-focused worker centers provide the perfect front — it seems they can even kill two birds with one stone when it comes to doing the SEIU’s bidding.

The #GuacOff is just one of the many gig-worker strikes WW and its conduits are planning for this week. However, if the outcome is anything like their efforts to strike last month, we’d bet Postmates — and Chipotle — don’t have too much to worry about.